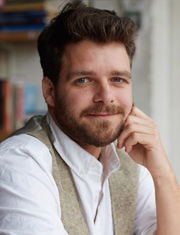 Tom Hunt
Tom Hunt is an award-winning chef, writer and presenter whose approach to food is rooted in its connection to climate change, championing a way of eating that prioritises the environment without sacrificing pleasure, taste and nutrition.

Tom Hunt is an award-winning chef, writer and presenter whose approach to food is rooted in its connection to climate change, championing a way of eating that prioritises the environment without sacrificing pleasure, taste and nutrition.

He is the author of the new cookbook Eating for Pleasure, People & Planet (2020) which includes his thesis on food sustainability philosophy. Hunt also writes about food and the environment in magazines and newspapers including a weekly recipe column for the Guardian called ‘Waste Not’.

Hunt has 20 years experience in food, agriculture and sustainability working with chefs, farmers, academics, charities and nutritionists as a food educator and facilitator. Starting out as a chef, he opened his first restaurant Poco in Bristol, winning many awards including Best Ethical Restaurant at the Observer Food Monthly Awards.

Hunt works closely with various charities including Fareshare, Fairtrade, The Soil Association and is a signatory of the Chef’s Manifesto – a United Nations SDG2 initiative, that calls on chefs around the world to champion climate-friendly cuisine in their kitchens for a more diverse, sustainable and delicious future.

Hunt contributed in the development of the Chefs' Manifesto Action Plan - a thematic framework which outlines how chefs can contribute to the SDGs through simple, practical actions. Designed as an educational tool, the Action Plan details simple actions chefs can take in their kitchens, classrooms and communities to deliver a better food system for all.

He co-produced and hosted the Chef’s Manifesto podcast, series 1 and 2 and co-hosted series 3, interviewing global leaders in food sustainability for an international audience.

Following his BA (Hons) Fine Art degree, Hunt began his career in food education in 2004 working under Hugh Fearnley-Whittingstall as a course leader, cook and food stylist at River Cottage and on the TV series. Whilst at River Cottage he was responsible for designing the content for his workshops. Since then he has continued to create workshops and courses for events and cooking schools including a recent collaboration with Le Cordon Bleu.

Mr Hunt’s vocation has made him an expert in his field with a deep understanding about how food can benefit culture, support biodiversity and reverse climate change, culminating in an approach to food that can help change the world